These twelve shades were worn between mid December and early February, a period of time including my birthday, Christmas and New Years Eve. When I picked them I knew what season it was obviously, but I still tried to pick interesting shades and not only easy-to-wear ones. l posted this lot to Instagram in the middle of January and my prediction then was that I would use all twelve in quite a short period of time. That ended up not being true, maybe because one shade was worn three times in a row (and despite that I did not get one single shot of me wearing it) and quite a few days I simply wore nothing at all. Sometimes I just can’t be bothered.

This round included quite a few indie brands and mainly shimmers and glitters. Let’s see how this lot fared in the audit.

Only five shades made it out of the audit as definite keepers. The five that made it are polishes that intrigue me in some way.

A nice jelly sandwich with Katherine and Feed the Monster

Zombie Christmas on top of Stylenomics

This grey jelly polish with red/green/white glitter is so unique that I have a hard time letting it go. I wear it from time to time but I’m unsure if that is enough.

In theory this polish was a great idea and I understand why I was drawn to and consequently bought it. An interesting muddy jelly shade, my favourite finish. In real life though..it just did not suit my colouring and I disliked wearing it.

I love this murky dark green shade a lot. But it stains, badly. Staining is common with green shades but in this case it was severe and will keep me from using it.

Not the best picture of me wearing it but Waterworld is just not the right shade of blue. There is something garish about it that I do not enjoy.

Cloudy fell a little flat with me. It’s a matte shade but even with a glossy top coat it felt boring.

Mary is a glitter polish that is so beautiful, but sadly it has dried out beyond the point where I can save it. So this was its last hurrah.

And finally we have Ray of Light – a beautiful polish and the one I wore three times without getting a single picture with it on my nails. It takes many layers to build up any opacity with this polish and then it flakes quite easily. It’s such an old shade and I never wear it anymore despite it being so pretty. So it’s out!

This site uses Akismet to reduce spam. Learn how your comment data is processed. 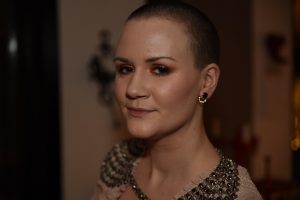 Chartreuse 💛💚💛 The star of this eye is L

Six months worth of empty products, 18 in total. I

I have not worn much makeup lately. My soul is tir

I have not had much energy to do makeup lately but

Velvet Dragon by @lisaeldridgemakeup used as a sta